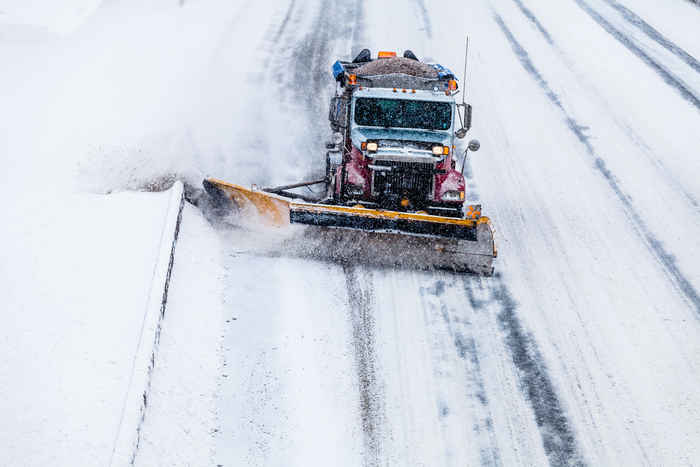 Successive winter storms and record-breaking cold temperatures are building a massive backlog of freight in the central US that may take weeks to clear. Photo credit: Shutterstock.com.

Much US freight activity skidded to a halt this week, as Winter Storm Uri, one of the largest and broadest winter storms since the Polar Vortex of 2014, stranded or delayed shipments and shut down shipping operations. Some regions of the country are digging out only to face additional snow and ice this weekend, further disrupting shipping, logistics, production, and sales.

Winter Storm Uri is proving unusual in its geographic reach, duration, and its impact on all modes of freight transportation, from maritime shipping and US seaports, which are increasingly clogged with imports, to intermodal rail, over-the-road trucking, and small package and last mile delivery. Union Pacific Railroad on Tuesday shut down its intermodal network for 72 hours.

The worst disruption is in Texas, where severe cold, ice and snow, and widespread power losses are disrupting the flow of freight not just regionally but nationwide. Nearly 3 million homes and businesses in the Lone Star State were without power Wednesday. The port of Houston container terminals at Barbours Cut and Bayport were closed Wednesday morning.

Truck traffic at the US-Mexico border is practically at a standstill, as the same storm system that slammed Texas interrupted power supply in northern Mexico, said David Henry, regional manager for Mexico at third-party logistics provider GlobalTranz. “We’re already seeing a pile up of pending exports, and that is just going to continue to bottleneck into next week,” he said.

The winter storms are likely to act as a catalyst for higher truckload spot market pricing, which has already turned away from a decline and begun to slowly rise last week as record cold temperatures drove up demand for temperature-controlled equipment over the past weeks, said Dean Croke, principal analyst at DAT IQ, a division of DAT Freight & Analytics.

“Last week’s cold weather had an impact on spot prices, and this week’s double storm is going to have a profound impact I believe next week,” Croke said. A preliminary look at DAT rate data from early this week showed spot prices increasing in lanes connecting Dallas and Chicago, Denver, and Atlanta. “That speaks to tight capacity and desperation to get freight moved.”

Many businesses in the Lone Star State may not be able to reopen until power can be restored. That’s a concern to many businesses nationwide because Texas is a major hub and transfer point for all types of shipments moving on the ocean, rails, roads, and air — as shippers learned during Hurricane Harvey in 2017. And Dallas is a major e-commerce distribution location.

“E-commerce shipments today and yesterday were well below normal levels as large parts of the US have their warehouses closed and carriers suspending pickups,” Aaron Rubin, CEO of ShipHero, said in a tweet Tuesday night. ShipHero, which has two warehouses in the Dallas-Fort Worth area, has shifted some volume to other markets, Rubin told JOC.com.

This disruption comes as containers pile up at US ports — especially in Los Angeles and Long Beach — for delivery to points inland. Delays caused by the storms will add to congestion, preventing movement of containers and goods from warehouses near ports to inland distribution centers. The winter storm is making February feel even more like a new peak season.

“All bets are off for the near term,” Jeff Tucker, CEO of freight management firm Tucker Company Worldwide, said Tuesday. Although Winter Storm Uri may remind shippers of the disruptive winter weather of 2013-14, “this week’s storm is different,” he said. “This is hitting during an existing capacity crisis, rivaling any in history,” not a slow-moving market.

That means shippers need to prepare for disruption that could ripple throughout the US, as delays put pressure on parts needed by manufacturers and stressed retail inventories. “I would strongly encourage more risk management planning and contingency around the supply chain,” said John Haber, CEO of Spend Management Experts. “What’s plan A, B, C, D, E and F?”

The US truckload spot market got hotter as temperatures dropped. Shippers scrambled for trucks to move freight ahead of the storm, pushing up spot pricing that had slipped in January by 2.5 percent the week that ended Feb. 14 from the previous week, according to DAT Freight & Analytics. The storm could accelerate demand, tighten capacity, and push pricing higher.

As the storm hit, inbound truck traffic dropped by more than 15 percent from New Mexico through Texas and into Tennessee, according to visibility software provider FourKites. Its online congestion monitor showed inbound truck movement dropping 6 to 10 percent on the West and Southeast Coasts. Outbound traffic in the South Central states froze as well.

Shippers should expect spot rates for truckloads moving to and from Texas to climb as weather and power outages drain capacity from the market. “Spot rates jump when temperatures drop, but it’s usually market driven and lane driven,” DAT’s Croke said. Preliminary data for spot rates this week show more of an emerging national impact, even before the storms, he said.

Outbound spot rates for temperature-controlled equipment from Dallas to Atlanta were up 21 cents per mile early this week from January, while similar spot rates from Dallas to Chicago were up 62 cents per mile, he said. “We’ve had a two-week sustained cold period with trucking lanes disrupted on top of already tight capacity. This could turn the market around.”

The fact that Winter Storm Uri disrupted transportation in so many areas, from the Pacific Northwest to the Southeast, will make reconnecting supply chains more difficult than if Uri had hit just one region. Truckload carriers such as Werner Enterprises are routing shipments around the worst-hit markets, which is tough when disruption occurs over such a large area.

“We’re trying to do the minimal amount in these areas until the weather passes,” said Daragh Mahon, the Omaha, Nebraska-based carrier’s executive vice president and chief information officer. Using new driver tools in its Werner Edge technology platform, the carrier is able to quickly reroute drivers and notify them about potential trouble down the road, Mahon said.

However, many companies in the area hit hard by the storm couldn’t avoid it. The storms shut down 20 to 25 percent of the fleet of truckload provider CFI, which is based in Joplin, in southwest Missouri, president Greg Orr said Wednesday. “With temperatures being so frigid and cold, a lot of truckstops where we get fuel, their lines are frozen and they’re not able to pump.”

The carrier is routing its truck drivers to areas where they can get fuel, Orr said. “We’re really trying to open up the fueling situation for all of our drivers. The big piece is just focusing on their safety and security and relaying all communications to our customers.” The carrier’s customer service phone lines began ringing off the hook over the weekend, before the storm, he said.

“We probably have 35 people working the weekend on a normal schedule, and we had to double that staff to keep up with the inbound volume of calls,” said Orr. Since Monday, CFI’s load count has been short about 400 loads each day. Prior to this week, the carrier was turning away 2,500 to 3,000 loads a week, said Orr. “Freight is piling up. This is affecting everybody.”

Regional and national less-than-truckload (LTL) carriers have seen large portions of their network shut down. “We are currently experiencing a widespread winter event that has resulted in closures of our terminals in Texas, Oklahoma, Louisiana, Arkansas, and some in Tennessee in addition to our home office in Waco,” Central Freight Lines said on its website.

Waco, which usually gets no snow in January, had 4.4 inches of snowfall last month, according to the National Weather Service. The central Texas city had 4.5 inches of snow on Monday night, and temperatures have not been above freezing since Feb. 10. “We are experiencing rolling blackouts,” Central Freight Lines warned customers on its website Wednesday.

LTL carrier Old Dominion Freight Line (ODFL) won’t be picking up freight in Texas until Friday, the company said in a statement on its website. Its terminals in Laredo and El Paso, both on the US border, were among the few service centers still open in Texas, although operating at reduced capacity. Another swathe of terminals was closed in Tennessee and Kentucky.

Yellow, the super-regional LTL carrier formerly known as YRC Worldwide, said it would deploy “additional resources” to company locations in need of assistance across its four brands. Its national subsidiary, YRC Freight, closed 22 terminals because of the storm and had another 25 sites that were operating on a limited basis, according to the company’s website.

“Severe weather conditions are causing industry-wide disruptions to the supply chain,” spokesperson Heather Nauert said Wednesday. “Yellow is working diligently to ensure employee safety while working closely with customers to meet their needs. We are updating our website multiple times each day to keep customers informed of our operating status.”

The disruption roiled the parcel and last-mile business. FedEx on Wednesday said it continued to experience “substantial disruptions” at its Memphis hub, and that package delivery delays were likely across the US. On Wednesday, FedEx Express had temporarily suspended service in 3,699 communities in 14 states, including 1,146 cities in Texas.

UPS suspended small package sort operations at its Worldport hub in Louisville, Kentucky, and in Dallas Monday, and canceled inbound flights to Louisville Monday night. The company reopened both facilities Tuesday, but noted on its website that “the movement of packages in the network may be impacted by weather conditions in other areas.”

The storm is a wakeup call for shippers that haven’t built more flexibility into their supply chains over the past year of disruption during the COVID-19 pandemic, said Tucker. “This is a not-so-gentle reminder to shippers that their procurement practices of the past are failing,” he said. “Shippers must improve their durability by adding more providers, not fewer.”

In the meantime, shippers need to dig out from what’s becoming an even larger backlog of freight than expected before the spring retail season arrives. That’s likely to put more pressure on contract rate negotiations and spot market pricing across modes.