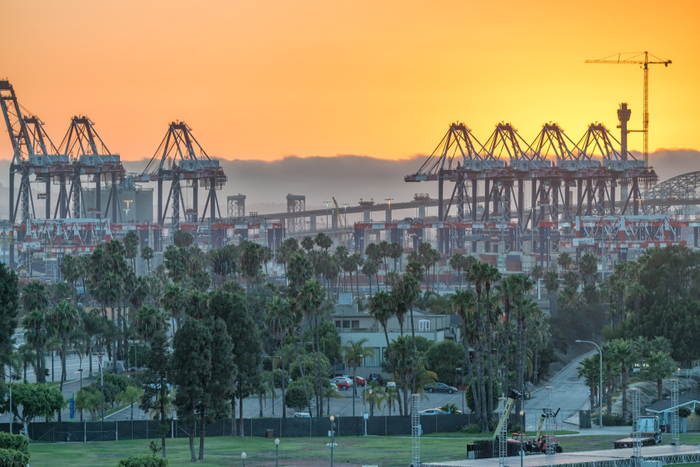 Despite some improvement in productivity last month, terminal operators in the ports of Los Angeles and Long Beach say they probably won’t dig out until late spring from the vessel backlogs and congestion that have plagued them the past six months.

Terminal operators say near-record container volumes will continue well into the spring, but the backlogs of vessels in the harbor and laden inbound containers on the terminals should dissipate sometime between April and June.

“Terminals are full. There’s nowhere to put the containers. We’re 35 percent below what we normally do on deliveries [to truckers],” Ed DeNike, president of SSA Containers, told JOC.com Thursday.

The average truck visit time in January improved to 88 minutes from 93 minutes in December, but was still much higher than the record low 58 minutes in June before imports spiked during the recovery from the lockdowns during the first wave of the COVID-19 pandemic, according to the Harbor Trucking Association.

Container dwell times at the 12 terminals in Los Angeles-Long Beach averaged 4.99 days in December, according to the latest figures posted by the Pacific Merchant Shipping Association (PMSA). That is twice the average dwell time of about 2.5 days that PMSA recorded in the first half of 2020.

“The longer containers stay at a terminal, the more congestion they create. Congestion creates the need for extra and unproductive moves when containers pile up more than they should,” said Jessica Alvarenga, PMSA’s manager of government affairs.

The COVID-19 pandemic has severely affected the longshore labor force in Los Angeles-Long Beach, with more than 600 known cases and 12 deaths since Dec. 1, according to the Pacific Maritime Association (PMA), the West Coast port employers’ association, and the International Longshore and Warehouse Union (ILWU).

Skilled equipment operators, who take deliveries of containers from trucks and lift the boxes into and out of the container stacks and are essential to a terminal’s operations, are in especially short supply, according to the PMA. As a result, the PMA and ILWU joint committee that each day assigns workers to the terminals has cut back on allocations.

“It comes down to a labor issue at the terminals,” said Scott Weiss, vice president of business development at Port Logistics Group, which has trucking and warehouse operations throughout Southern California. “There are still bottlenecks in getting containers into and out of the terminals,” he told JOC.com Thursday.

The reduced productivity of longshore labor due to the coronavirus disease 2019 (COVID-19) has contributed to the vessel delays, which are averaging 7.3 days in the port complex, according to the Signal platform, published daily by the Port of Los Angeles.

The ports are working with trans-Pacific carriers to reduce the load on Southern California until volumes return to normal. Gene Seroka, executive director of the Port of Los Angeles, told JOC.com he is working with carriers and terminal operators to “meter” import volumes until the ports catch up. Hapag-Lloyd has announced structural blank sailings to Southern California in February and CMA CGM is dropping Los Angeles from a trans-Pacific string to make Oakland the first call inbound from Asia, followed by Seattle-Tacoma.

Alan McCorkle, president and CEO of Yusen Terminals in Los Angeles, said the fact that the terminals have handled near-record container volumes the last six months without experiencing total gridlock shows they have the physical capacity to move peak-season volumes, provided those peak seasons don’t last for six consecutive months. He predicts a return to normalcy in May or June.

Scott Schoenfeld, general manager of Fenix Marine Services in Los Angeles, said Fenix is showing signs of improvement, so he is optimistic that congestion relief could come as early as April.

“Our container yard has a lot more daylight,” he said. Container density within the yard is not as great as it was late last year, and more truckers are able to take delivery of containers each day.

However, container volumes remain elevated, and that should continue for at least the next month as extra-loader vessels continue to arrive in Southern California.

Jon Monroe, who serves as a consultant to non-vessel-operating common carriers (NVOs), told JOC.com that carriers in the eastbound trans-Pacific have deployed or will deploy 10 extra-loaders in February, all of them to Los Angeles-Long Beach.

Monroe noted that although more factories in China than usual will attempt this month to maintain at least partial operations in order to clear the backlog of merchandise that has accumulated at their facilities, the total volumes in the eastbound trans-Pacific in the coming two months should be somewhat less than they were the past six months.

The 1.8 billion square feet of industrial and distribution space throughout Southern California is not completely filled to capacity, as it was last fall before holiday-season merchandise was moved out to stores across the country, Weiss said. Nevertheless, space availability at warehouses and distribution facilities is a mixed bag.

Productivity is generally down and labor shortages due to COVID-19 are common at warehouses throughout the region, while at the same time volumes remain exceptionally strong, Weiss said.

“Everyone I am talking to is experiencing record volumes, record growth, but everyone’s upping their game to handle it,” Weiss said.

Weston LaBar, CEO of the Harbor Trucking Association, said drayage capacity is tight and worker availability is challenged at the both ends of truckers’ routes, the marine terminals and the distribution warehouses. However, workers will return in larger numbers when they feel it is safe to do so.

“The single biggest thing we can do is vaccinate,” LaBar said.